I'm almost coming to the end of the scale testing stage, having landed on a style that looks good printed at 20mm, 15mm and 10mm. 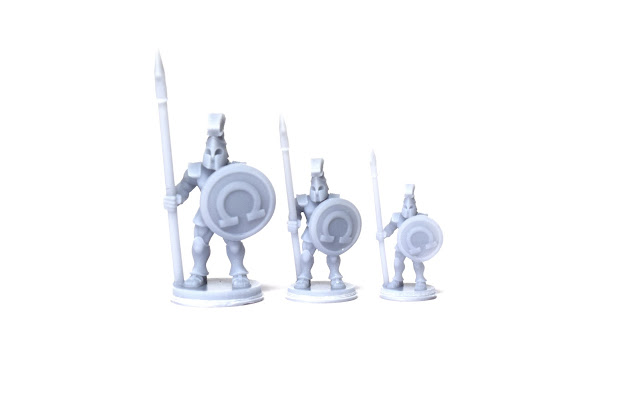 I can't decide which scale I want to do... so making something that's multi use seems like the best idea.

20mm, perfect for Dragon Rampant perhaps. I have a soft spot for this size and think doing some classic fantasy armies like this will scratch an itch for Warhammer Fantasy Battle style gaming (miniature count wise especially - a block of 20 spearmen is more palatable at this size than at 30mm or whatever the warhammer size is now).
Every single mini there is slightly different... but you'd barely notice. Hopefully its subconscious. 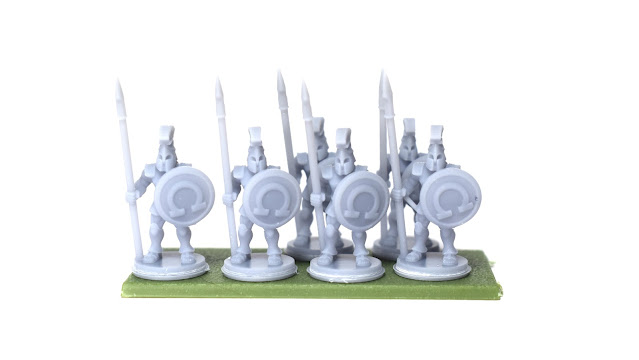 15mm. This is probably my go to for muti-based style gaming.

10mm, Warmaster. Doing 5 minis on a strip with interlinked/touching between the figures is of course the usual approach for 10mm. That's on the back burner, but printing individually isn't too much of a pain, and it really cuts down on production failures (a single broken spear tip on a strip of 5 ruins the entire print/cast). Straight from the horses mouth I recall hearing this from Rick Priestly... the designer of Warmaster mentioning this... in hindsight regretting they did 5 minis on a strip.) 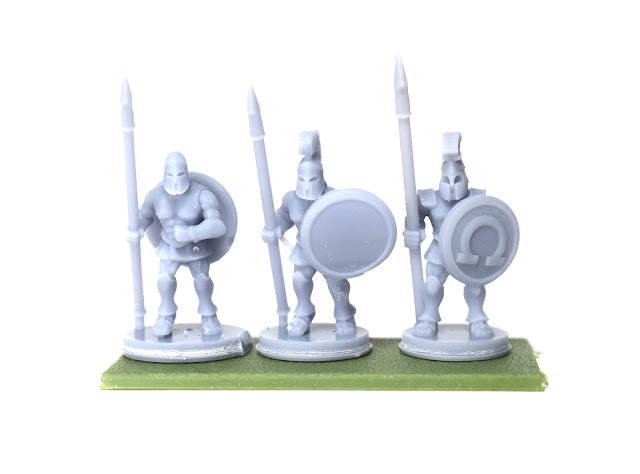 The above shot shows the style evolution, the mini on the left was the fist with more of a realistic Hoplite. At smaller scales though they are slightly flimsy and lose their visual punch. The final version on the right is slightly more cartoonish than I generally prefer (as a sculptor I like the first one best) but the practicalities of production, painting and using them as gaming pieces trumps the 'artsy' sensibility.

Now that I've locked into the basic infantry I can't start on some more fantastical elements.

This is proving to be quite a chore, digital sculpting is a breeze... but getting the sculpt just right for translating into a physical print is certainly a trick!

Heres' a load of test shots. The three on the green base are the latest versions, although those legs were slightly too thin... so they're being bulked out. 15mm toe to eye, so about 18mm to the top of the head.

(These are basic iphone pics) 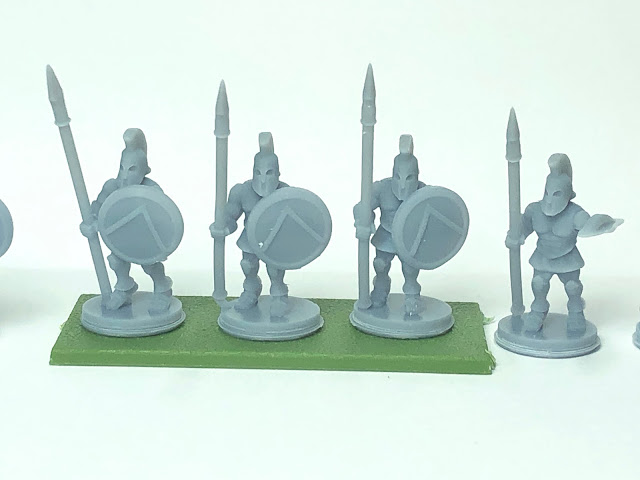 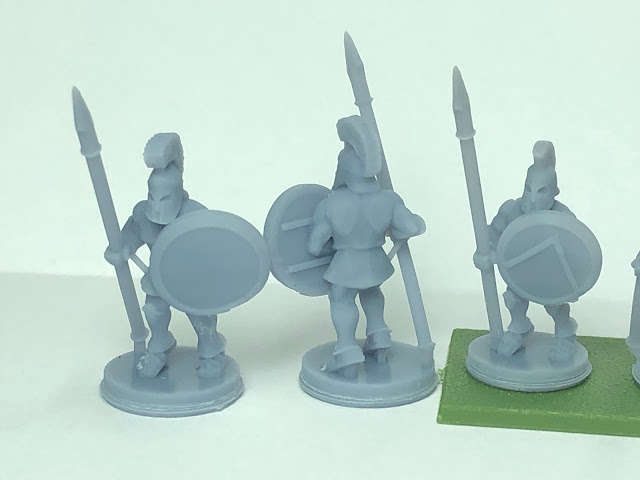 There's definitely a learning curve to this...

These are very quick and messy sculpts just for practice. As we all know- it's not as simple as scaling a sculpt up or down, the entire style of the thing needs change - take the spears here as a prime example.

I'm a convert to digital now so 2022 should be extremely productive. 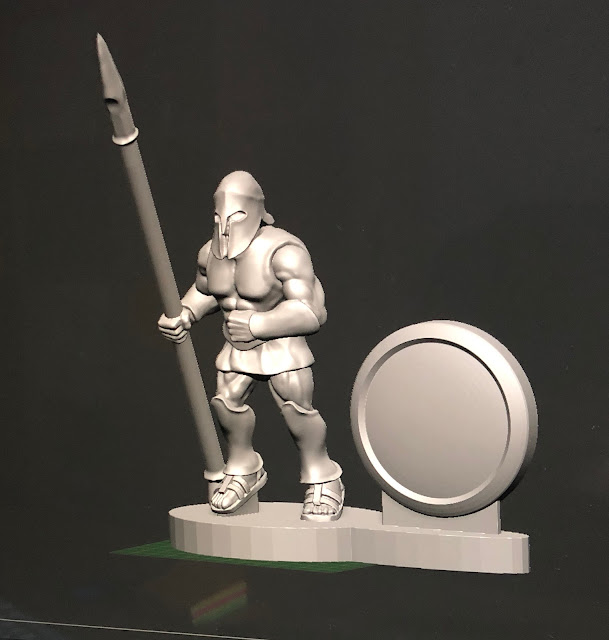 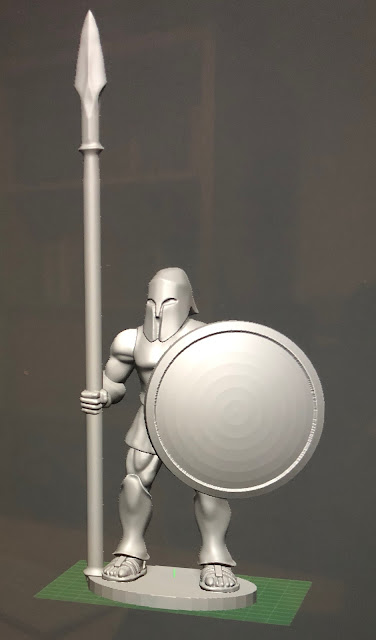 I was never a fan of the Wheel of Time books (I think I only got to book 4...) and even less of a fan of the new Amazon series.

That said, these conversions are based on a couple of the main characters. Mostly Frostgrave plastics from Northstar, with the guy on the left using Fireforge Mongol legs and torso. Most of the arms needed sculpting, along with a lot of details and touch ups.

All the base colours are blocked in and a few washes are going on. This will take a while to paint... and the base will take even longer (few more snow layers and textures still to go). 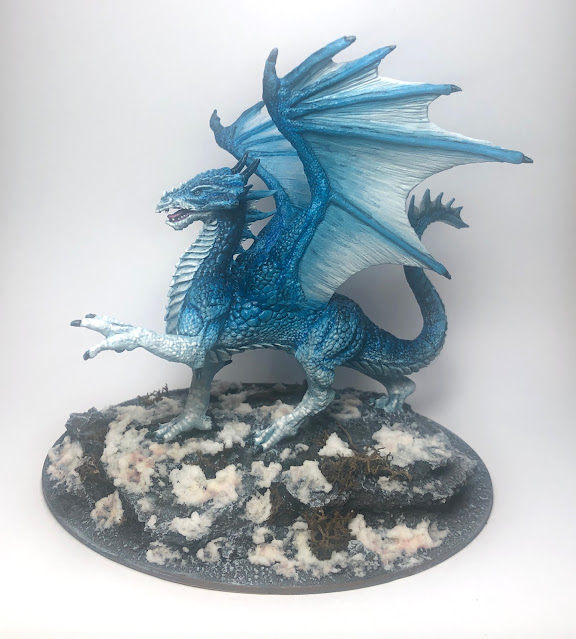 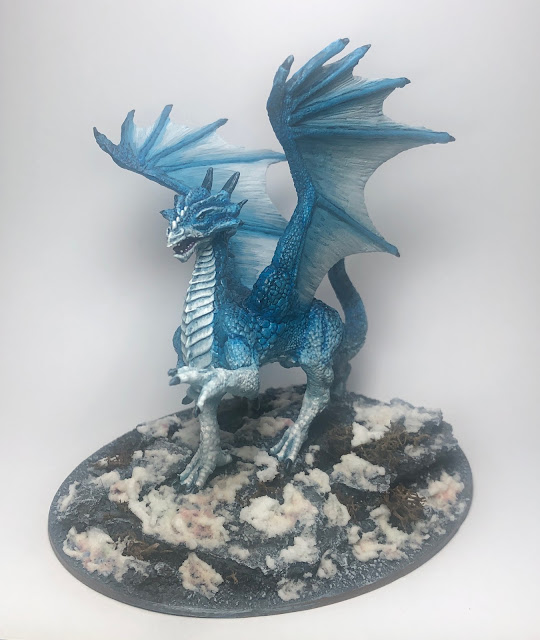 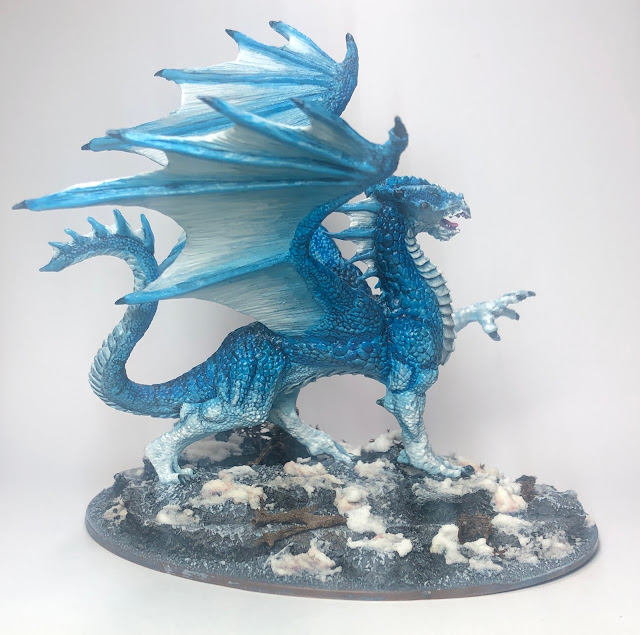 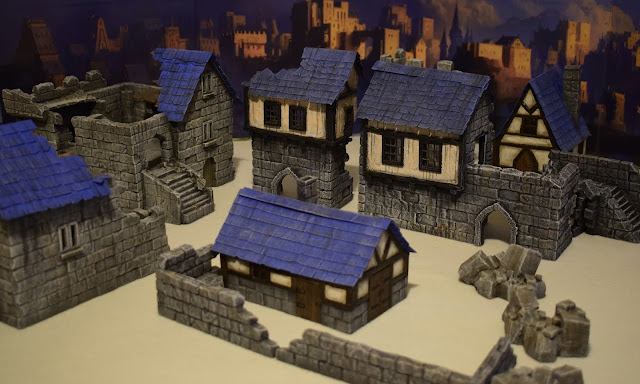 These latest 3 terrain pieces painted up relatively easy, and they seem to configure in a few different ways quite nicely (totally unplanned).

The entire collection now needs details like signs, railings and the odd crate. I really want to add icicles and snow to everything but it's quite a delicate procedure so I might experiment with photoshopping these images before I jump in with glue and artificial snow... I've never been satisfied with my winter efforts on terrain in the past. 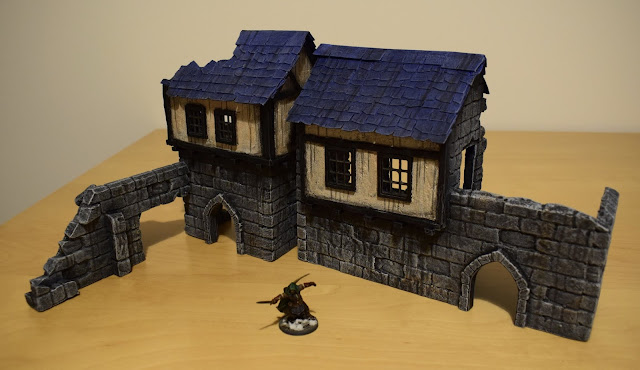 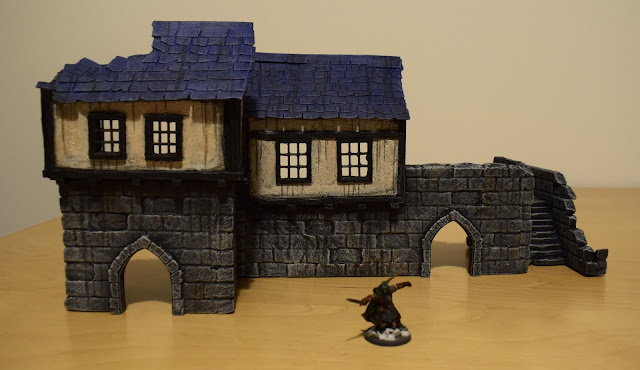 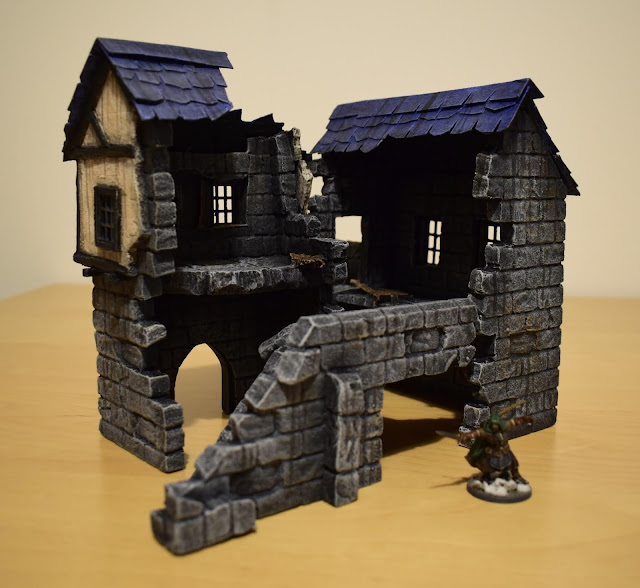 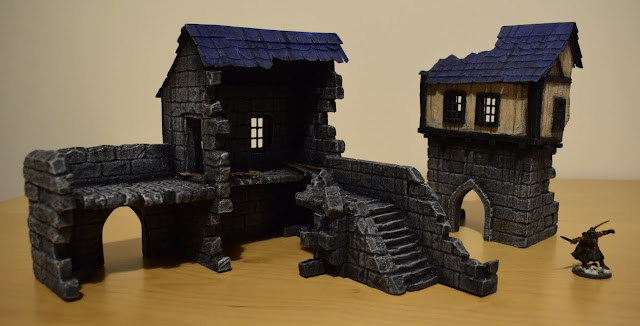 Some gratuitous shots with a background skyline with the Loke battlements DM screen. 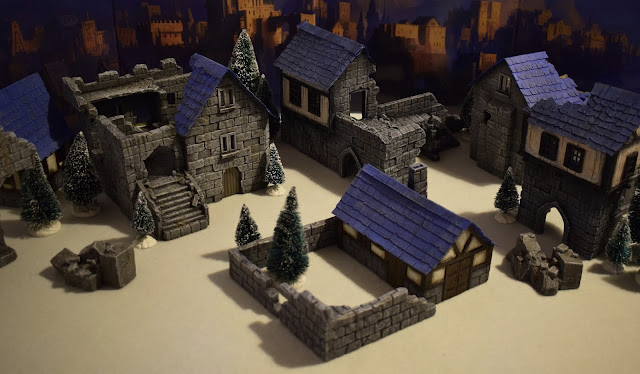 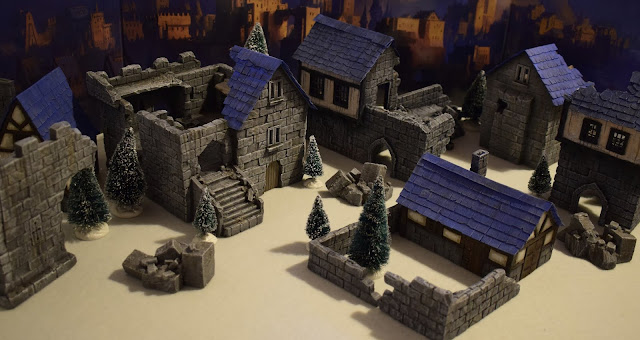 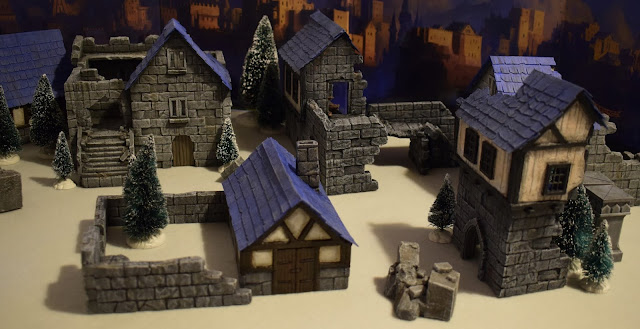 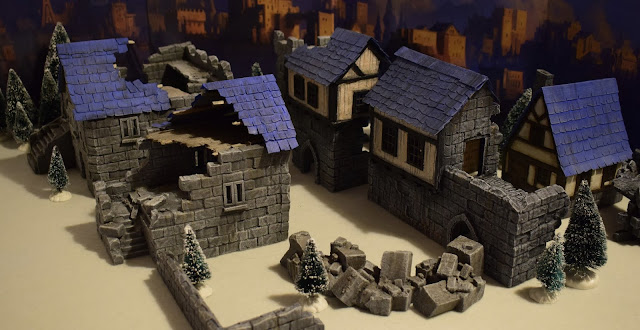 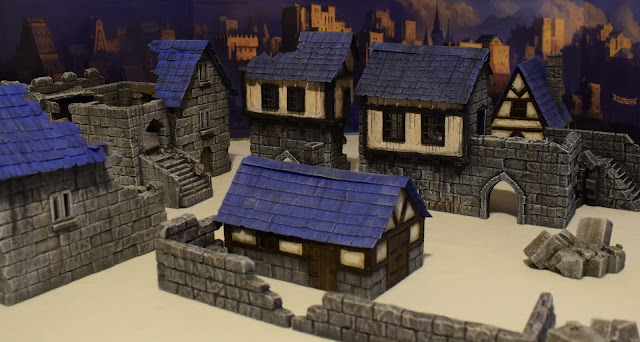 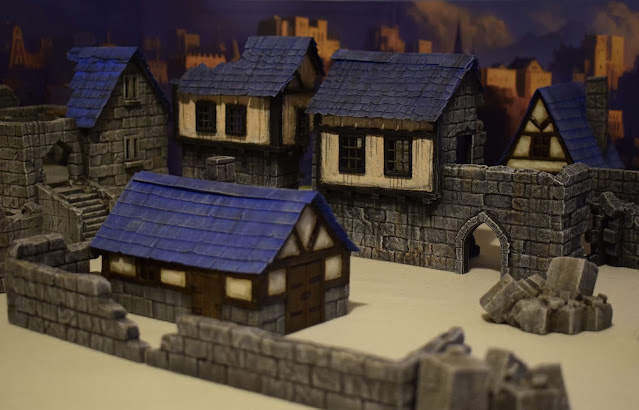 I wanted to make something that might be a row of houses or reflect a little street in downtown Felstad. I'll do more later continuing this theme but this is a nice little versatile set to start with.

Almost everything is from Firedragon Games: XPS foam sheets and resin windows and doorways. Only the cardboard tiles and wood were entirely raw materials.

In hindsight I might have preferred to make everything from scratch, I'm not sure how those windows will look next to the actual wood texture once painted. I'm sure it will be fine... 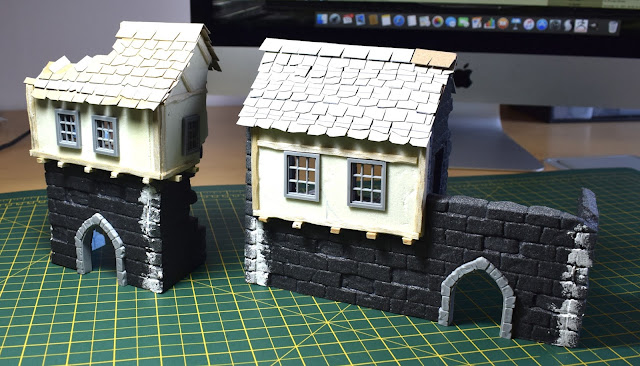 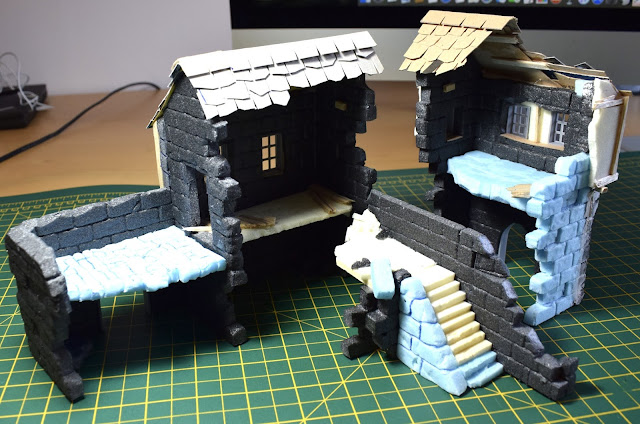 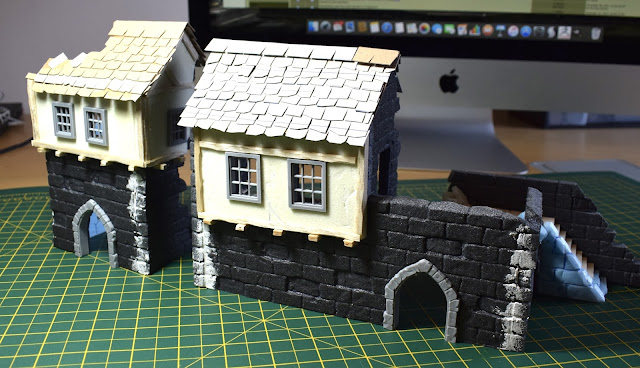