I've had a short break from sculpting and focused on painting all the Nomads I had for Infinity, this is the stuff from Operation:Icestorm and Beyond Icestorm sets.

Both out of print unfortunately (I think).

I'll come back to this range and do the Pan-O faction at a later date, which I assembled and undercoated years ago and never got round to actually painting.  I've also acquired the Onyx Contact Force as well as the Spiral Corps army packs, along with a handful of random characters... which might sit in the box for a few more years. Maybe. 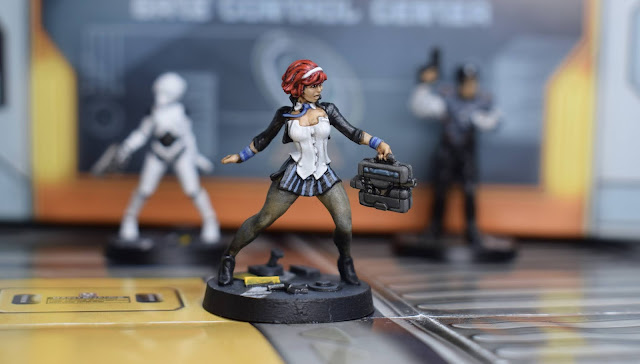 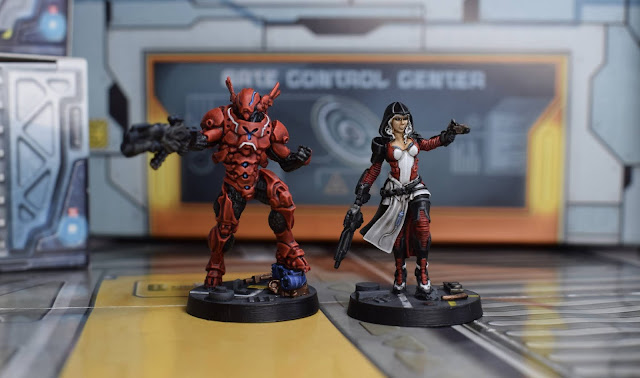 I think the Fembots were from Statuesque Miniatures, nice addition to the collection and they blend right in... despite my lazy paintjob on them.

Infinity miniatures (and Star Saga.. yes they seem to scale quite well... for use in Stargrave) 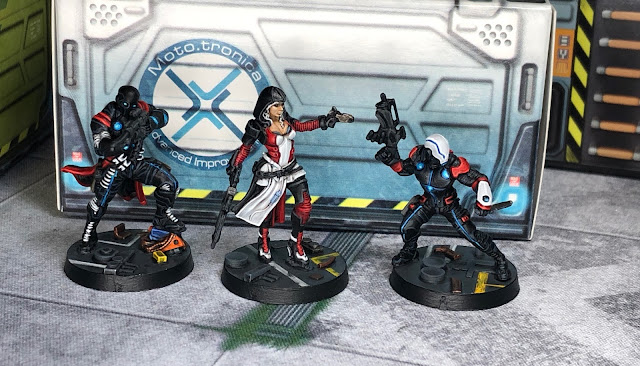 I've had these minis for a couple of years but never really did anything with them.  I decided to give them a lick of paint as part of my foray into 3d sculpting and printing to see how I felt about the style and size of them.

There's no denying that Infinity minis are very cool and stylish, and most importantly for me they're internally consistent as a range when it comes to style and size (mostly).

Heroic style has really bugged me for years. I always drift back to it as a fun and familiar style, but 3d sculpting offers up the opportunity for me to produce different version of my minis - heroic style, or even Infinity style. I'm under no illusions you can simply shrink or inflate a sculpt, features will need to be tweaked accordingly in every case when you switch size and style.

As a mini designer Infinity stuff really falls down in one key area for me - too many parts to glue together when the mini could easily be a single cast. Total pain.

That said, infinity stuff is seriously easy to paint! Way more easier than some of the recent GW plastics. The small size of infinity means less surface area. No big areas to blend, so less need for washes. A fine detail brush and a steady hand are a must, but layering of paint is very effective.

The mantic games Star Saga plastics are essentially cheap and nasty casts, the sculpts are pretty decent but I'd say slightly over engineered... too much detail and gubbins that really aren't necessary. Still, quick table quality paintjobs on them using my Inifinity approach seems to have come out OK.

And yes, they scale really well with Infinity.

Going off on a tangent now, this little collection I have will be perfect for Stargrave! 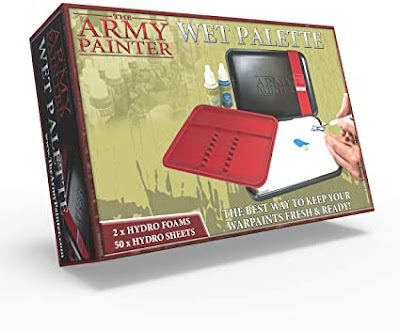 I recently ordered the army painters wet palette after years of using a homemade one with foam and greaseproof paper.

The palette came with a little army painting guide booklet that I quickly flicked through before it went into the recycling... I got a nice surprise and saw a very old sculpt of mine was in there as a painted example. 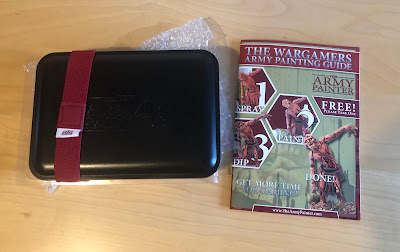 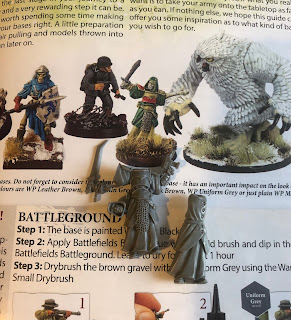 This little guy, painted green and red was originally sculpted back in October 2012 (I had to check the tags 'Crowmantia' on this blog to find the original post.
I'd only really been sculpting properly for about 3 years at this point, the sculpt was actually OK, it's just the anatomy and overall style I look back and question now. I dug out an original resin cast from my stash but could not for the life of me find the original sculpt. On the right of the original cast however is the original sculpt of the dolly... I made several such in the early days and re-used them multiple times. The sculpt is in grey procreate and you'd be forgiven for thinking it's a resin copy.
At the time I was really liking the Victrix Napoleonic plastics and I did an entire range of steampunk/low tech science fiction minis to match the exact scale Victrix were using. Pretty much every post on this blog from 2012 up to 2015 was done in this style - the original tox troopers, desert rebels, imperial borderers, cultists, aether pirates etc.
'Slimline' is probably the best way to describe some of them. 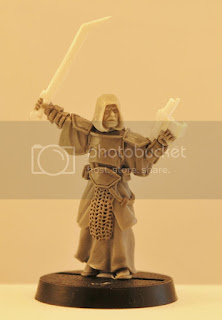 So old I've lost the original image and photobucket have watermarked my online version!

I contacted Anvil Industry in 2012 about casting some of my dollies in resin for me and they kindly accepted the commission. Once I'd got some finished sculpts in order using said dollies, Anvil put them into production for me. And that's how I really got started with licensing, casting and getting my sculpts out for sale (well, actually from about 2008 I was active on the Troll Forged sculpting forums and had some stuff put into production by them in the states, my sculpts weren't the best but the owner/operator was a very kindly a supportive chap who gave lots of aspiring sculptors a chance).

Bit of a nostalgic post about nothing, but I got a genuine little smile seeing this sculpt in here. It's also quite timely, I've had a slew of emails from people asking if my sculpts can be featured in their upcoming rulebooks recently so I might have some surprises like this in the years ahead.

Email ThisBlogThis!Share to TwitterShare to FacebookShare to Pinterest
Labels: Crowmantia

My foray into 3D printing has been a complete doddle.

The kit sat in it's box for a month while I made some preparations, but I was up and running in about 2 hours after opening it and plugging it all in (and that was going meticulously through all the setup configuration and tutorials)

Shameless plug for my pals at Anvil, they are your gateway. I'm a Patreon member and the volume of stuff and support you get for £7 a month is phenomenal. I'd highly recommend it even if your a newbie like me (more so if you're a newbie actually...) 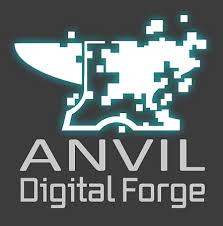 This post on the Anvil blog with a few short videos is literally all you need to get you going in terms of guidance and tutorial.

I'll blog more about the printer itself (which comes with lots of the trimmings you'll need, like gloves, mask, scraper, USB stick, etc.) as well as the process, once I've had more practice. 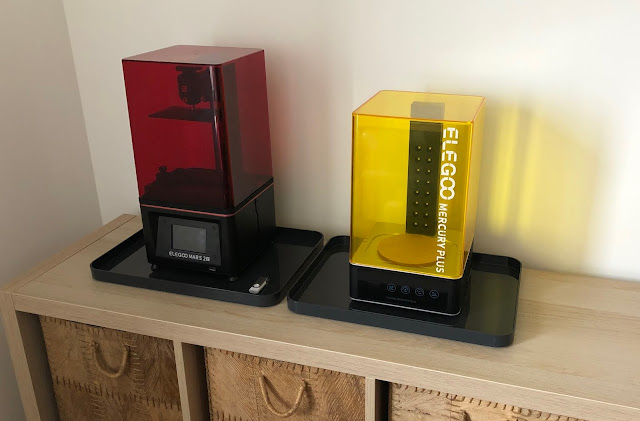 Setting up a little printing station is a must, and I can't stress ventilation enough - there's an open window less than a metre to the left in that image. Lots of paper towels, gloves and alcohol for cleaning can seem daunting at first but once you have a little procedure established it's completely simple and no hassle whatsoever. The box at the bottom left of the shelf houses the gloves, towels, resin, etc.

The two trays were actually box lids I bought at Homebase, very sturdy and a better alternative to flimsy plastic serving trays. (The trays are in case of any spill or mistakes on my part.)

I printed a ton of stuff, all from Anvil Industries welcome package on their Patreon... all except from those two chess piece towers, they're on the USB from Elegoo and the first test prints you do. They'll come in handy for Frostgrave terrain. 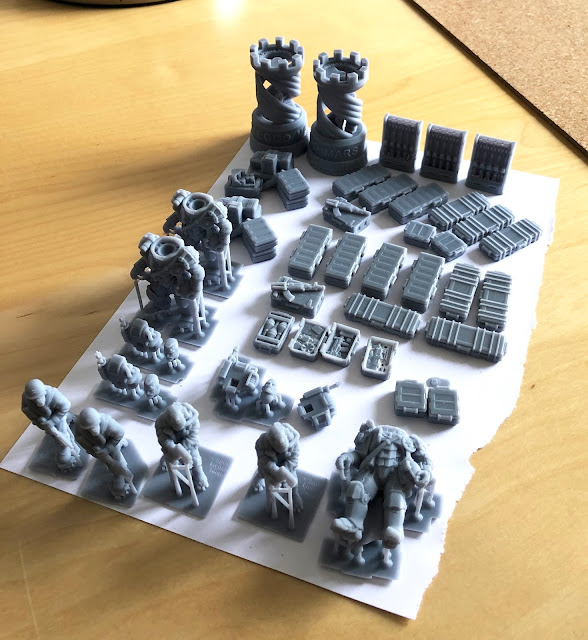 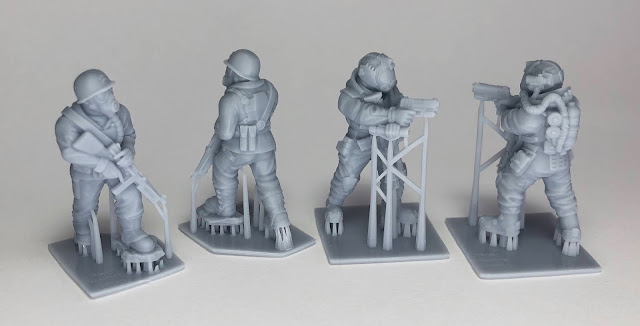 The reason Anvil are such a great place to start is that their models come pre-supported, meaning they've gone to the trouble of configuring all the struts and supports you need for printing. You literally load the file to your USB, stick that into the printer and push a few buttons to print it.
I'm slightly wary of a lot of the other fancy 3d sculpts you see being advertised on countless Patreons, pre-supported is always better... but I've read some reviews where the pre-support stuff was insufficient and people had failed prints required a bit of tweaking themselves. Anvil have always been great at this 'user experience' stuff so you can't go wrong with them.
That all said, I did have a bit of an experiment at building supports myself (I'll need to learn it sooner or later). The guy below was initially configured horizontal, a rookie mistake. I'll not do explaining the science any justice here, but if you look at the lower comparison shot you'll see the horizontal based print on the right is displaying some sag around the collar. That's gravity for you.
This isn't the replicator on the Enterprise, there's some engineering know how required. 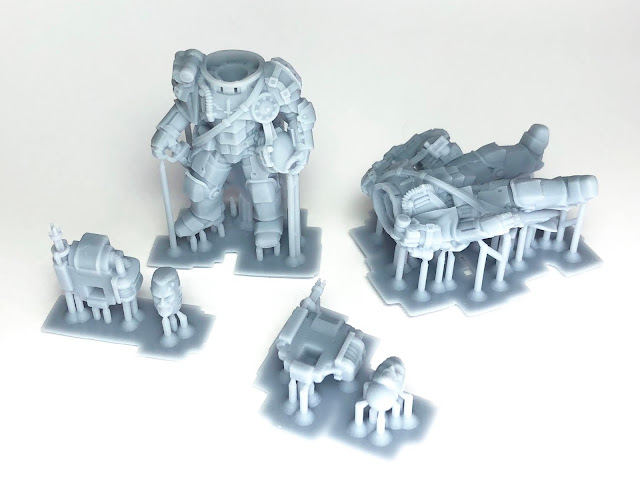 In summary... DO IT. I don't think I'll every buy a plastic mini ever again. And if I can get the STL, I'll buy that first instead of a physical cast.

In the long run hobbyists will save a massive amount of money. Every day there's new stuff hitting the market and the technology keeps improving. If you want a massive army, you'll pay on average pennies per miniature print. I suspect you could print an entire space marine chapter for about £200.

Lots of minis and massive armies are not my thing, for me personally the key is I can replicate stuff without sending it off to a mould maker, and experimentation is much faster.

I just need to get back into/good at 3D sculpting now. I'm sure I'll manage.

Legion of the Bull God

The idea behind this range is the Minotaur has usurped his adopted father, claimed the island of Crete and sired a mutant race. These are the vanguard ragged infantry that serve the Minotaur and seek to invade  mainland Greece..

Still lots of detail to add. 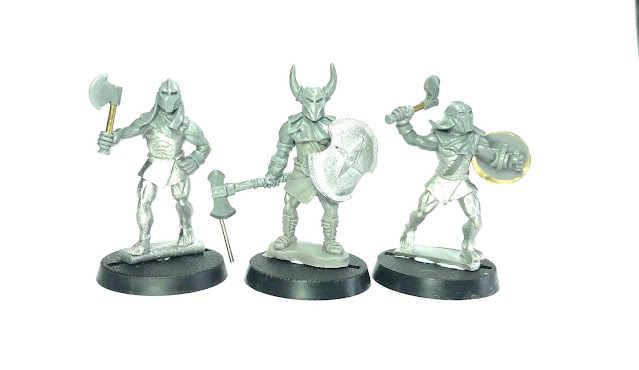 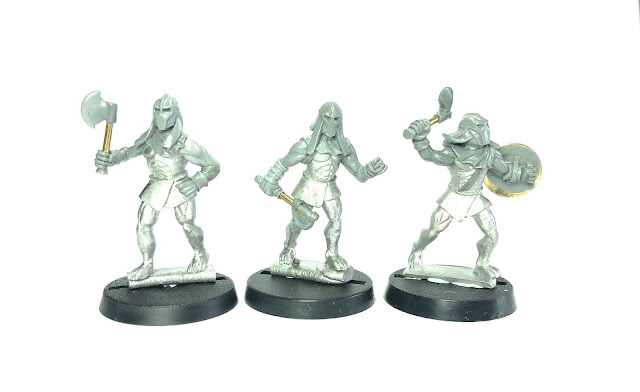 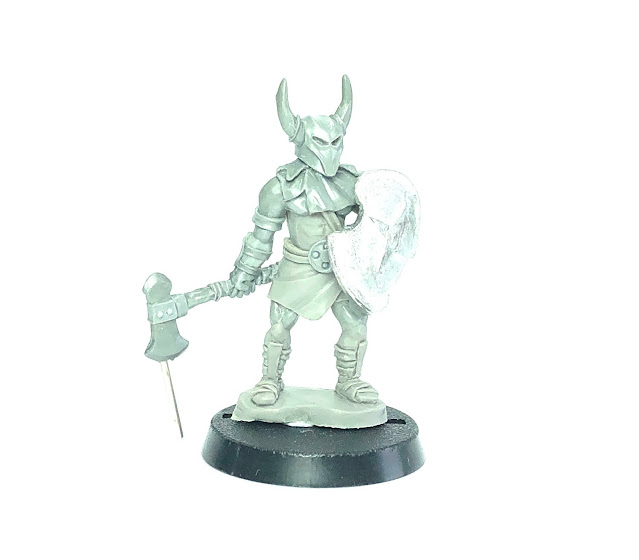 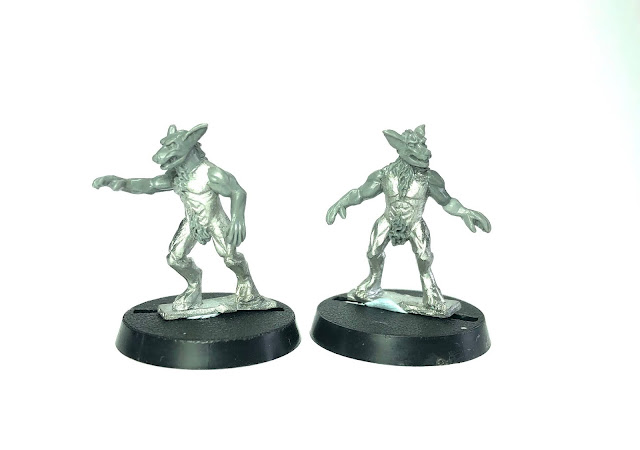 Kobaloi, Satyrs, Bulltaurs and other such stuff will find a home in this range.

These are small scale in line with my Fallen Dwarf range (which is in line with Lord of the Rings miniatures). They will also serve as cannibals or 'low-men' for my mythology range.

More soon on these, armoured spearmen next, some characters... then cavalry.

Archers are singe piece. Swordsmen have interchangeable sword arms and shields (shields still to be made) 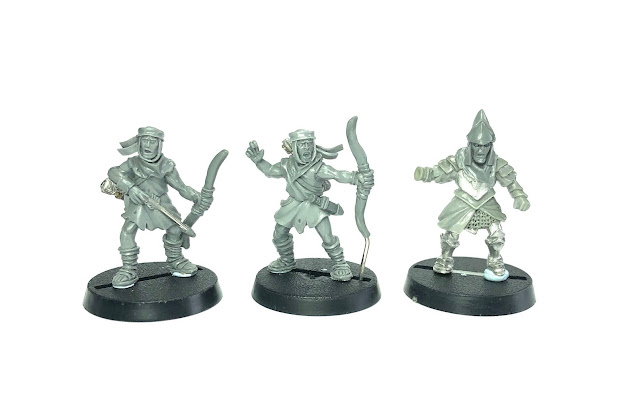 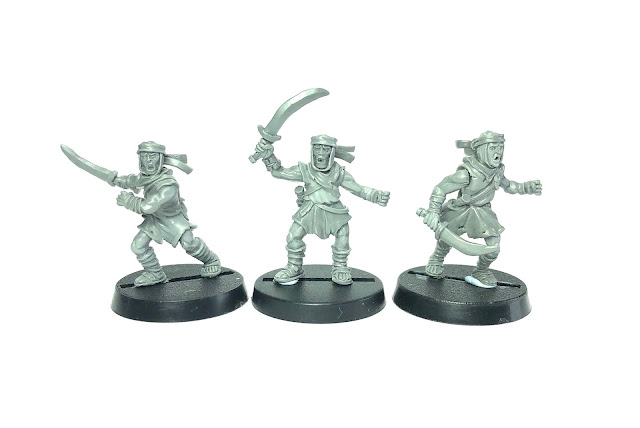 Some WIP shots of various bugs and general nuisance critters. These will prove useful for tons of ranges... 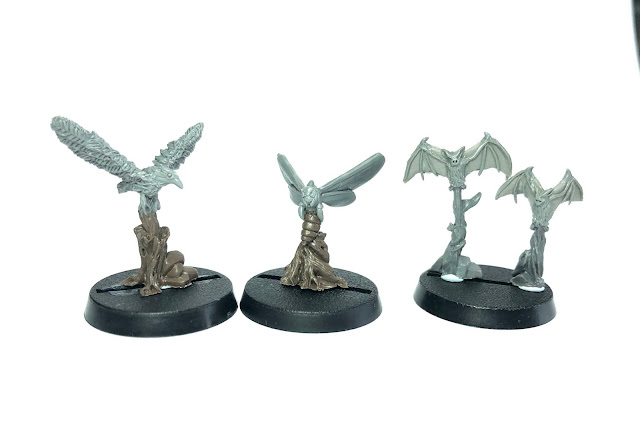 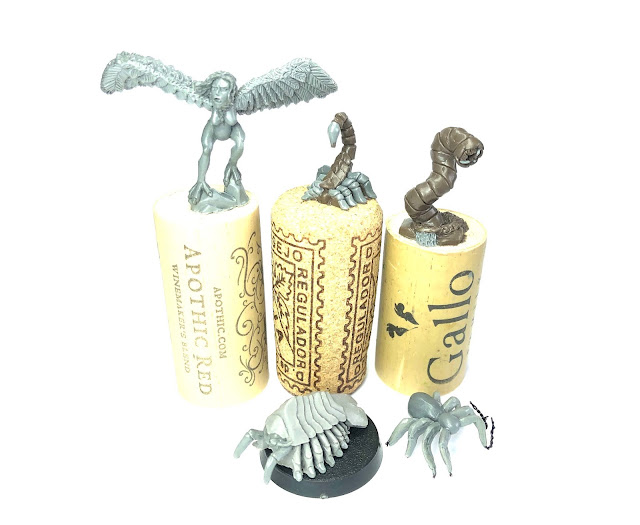